What is Traditional Floor Malting? This is how we do it at Kilchoman…

Kilchoman is one of only a handful of distilleries still practicing traditional floor malting, a process that Scotland’s other distilleries have outsourced to commercial maltsters.  The labour-intensive nature of floor malting is a significant factor in its demise, though it remains at the heart of our philosophy.  Our 100% Islay represents the revival of traditional farm distilling, standing alone as Islay’s only Single Farm Single Malt Scotch Whisky, completing all stages of the process at Kilchoman from barley to bottle. 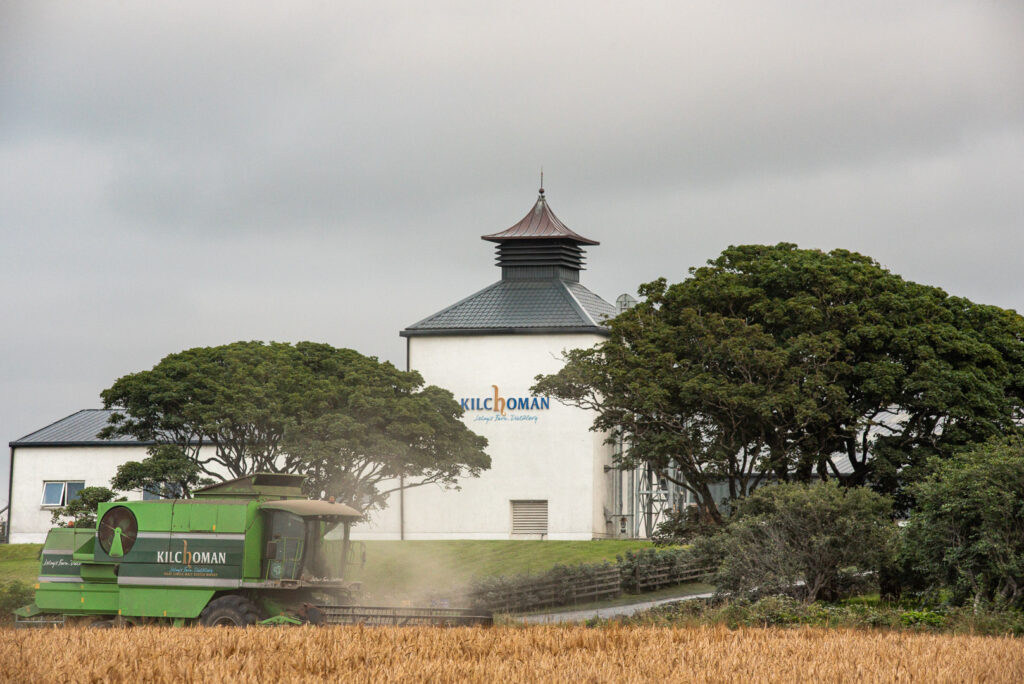 Malting consists of three main functions:  steeping, germinating and kilning.  As the first of these steps, steeping could be said to be the most critical.  The process of steeping determines final malt quality and if you don’t get this stage right, you are potentially giving yourself a greater chance of problems later in the malting stage.

At Kilchoman, the barley we harvest can be stored for up to a year before being used in the next whisky-making process, steeping. The purpose of steeping is to break dormancy in the barley and trigger germination by achieving an optimal moisture level in the grain which is normally between 43% and 45%.  The main considerations at this stage are temperature, moisture content and germination and these are all carefully monitored by our team throughout.

Temperature – our steeping regimes vary at different times of the year to ensure optimal conditions are maintained.  For example, in the colder winter months we often do an 8-hour steeping cycle which means the barley is steeped for 8 hours then drained and left for another 8 hours before repeating these steps for a total of three cycles.  In the warmer months we do 12-hour cycles which means the barley is soaked for 12 hours then drained and left for 12 hours before repeating the soaking and dry cycle again.  Both cycles take a total time of 48 hours, the significant difference is the water temperature during each steep.  Ideally we want the temperature between 12 and 16 degrees Celsius.  In the summer the temperature outside rises and therefore so does the water temperature which is sourced from nearby Glen Osamail.  The shorter eight-hour steeping time across three steeps helps us to maintain a cooler water.  Barley steeped at warmer temperatures develops less a-amylase enzymes which are critical for mashing.  Another benefit of using colder steep water and a longer steep cycle is that there is a more uniform water uptake and hydration throughout the kernel.

Moisture Content – as well as ensuring the ambient temperature throughout, the correct combinations of water/air/water/etc must be given to result in the correct moisture content of the grain being raised to the required level of around 43-45%, and without ‘drowning’ it!

Typically, the first soak will bring the moisture level up to only around 37% so further steeping is required.  By using multiple waters the air rest time after each steep allows the grain to accept more water in the next steep.  It also avoids the risk that the grain will become saturated resulting in slower chitting if too much water is given too quickly.

It is crucial that the moisture content of the germinating barley is distributed as evenly as possible between each kernel.  Air is blown through the grain suspension between the wet phases to remove carbon dioxide and toxic metabolites, to discharge excess heat and to replenish oxygen as well as helping to ensure that the grains are all consistently modifying.

Germination – At around 35% moisture content the embryo within each kernel of barley will start to germinate, but there is insufficient moisture to allow the complete modification of the starchy endosperm that we require. Reaching the desired moisture level steeping and later at the drying stage is crucial as it determines the quality of the malt and will have an impact on the overall yield.

When the desired moisture content of between 43-45% is reached the ‘green malt’ (the term for the barley at this stage) is then spread on the malt floor by hand using traditional methods for the second phase of growth.

The thickness of how the green malt is spread on the floor is a judgement the team make in order to maintain the ambient conditions.  In the colder months the room temperature will be lower so the green malt is spread in thicker piles of approximately 400-500mm in comparison to the warmer times of the year when it is spread more thinly.  The reason for this is to maintain the ambient grain temperature for growing to continue.

Throughout germination it is essential that the grain bed maintains moisture otherwise the grain could become dehydrated and result in restricted modification. The moisture of the grain is monitored throughout and we maintain a moisture of above 40%. 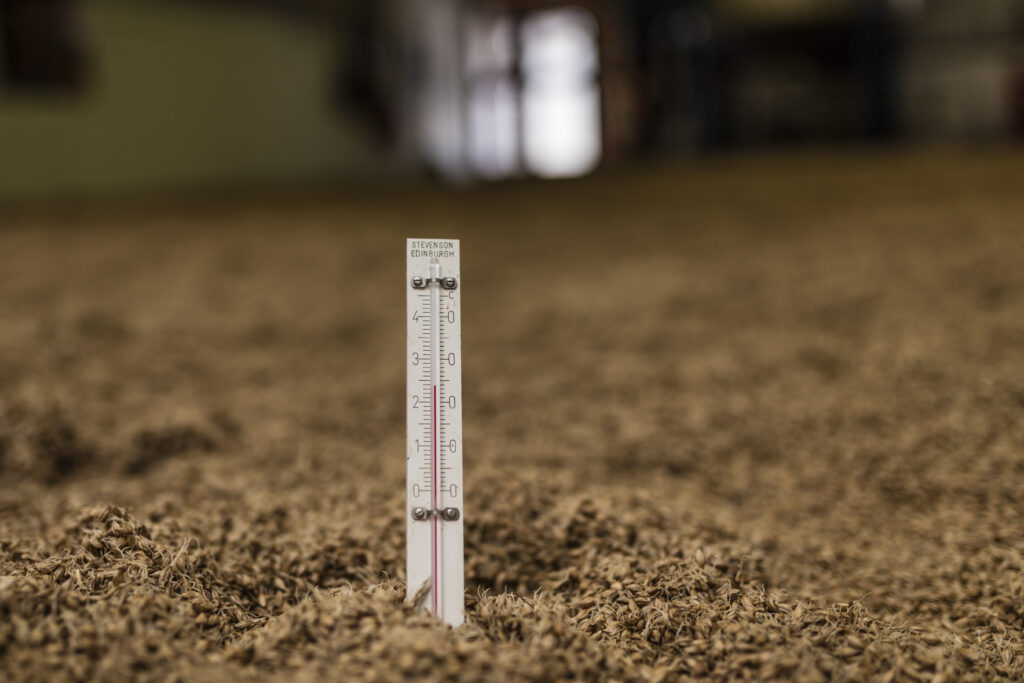 At certain times of the year, mid-late summer especially, the air is warmer so in order to keep the grains within the desired temperature range we will open windows to help cool the room and spread the malt as thinly as possible on the floor.  In contrast, at cooler times of the year, the green malt is laid on the floor in a deeper pile to help keep it warm.  In particularly cold times we have occasionally kept the door from the kiln area open to gain some extra heat from the kiln fire.  It is all about monitoring, assessing and responding to the environmental factors and how the grain is modifying at each stage of the malting process. 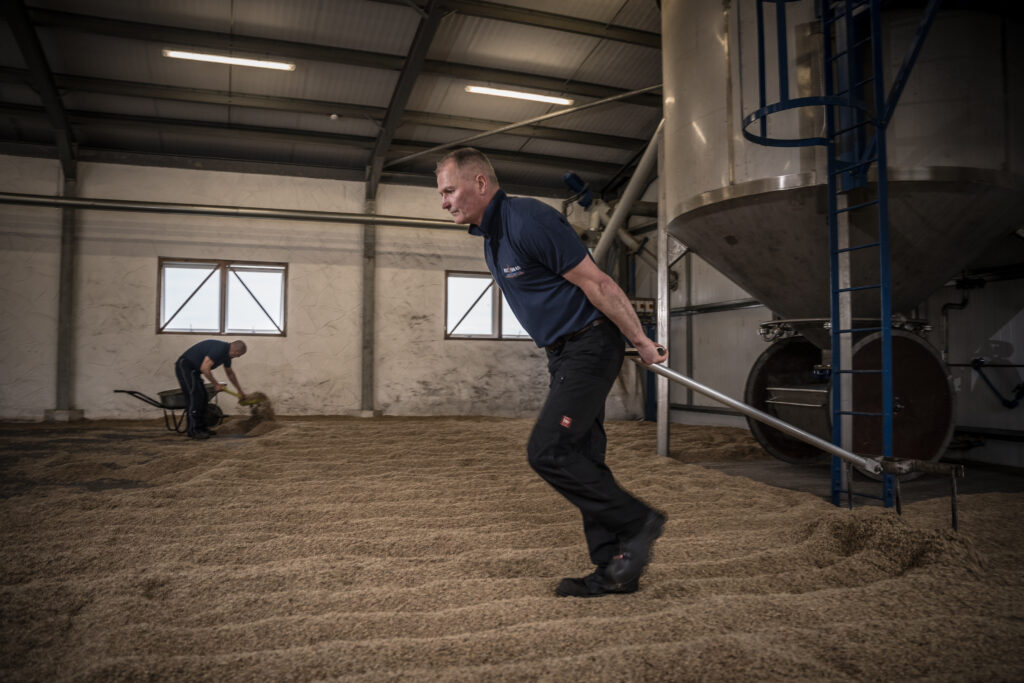 Two major changes occur during the time the green malt is on the floor: Firstly enzymes are developed which break down the cell walls, the `action of these enzymes gives us freely available starch. Secondly, other enzymes are produced which break down proteins.  Further enzymes are developed which will convert the starch into fermentable sugars in the mash tun during the mashing stage. These changes are known as “modification”.  When the acrospyre is visibly around three quarters the length of the grain this indicates that we’ve reached the required point and the time has come to stop the germination process and conserve the enzymes required for mashing.  It takes around five days to get to this stage. 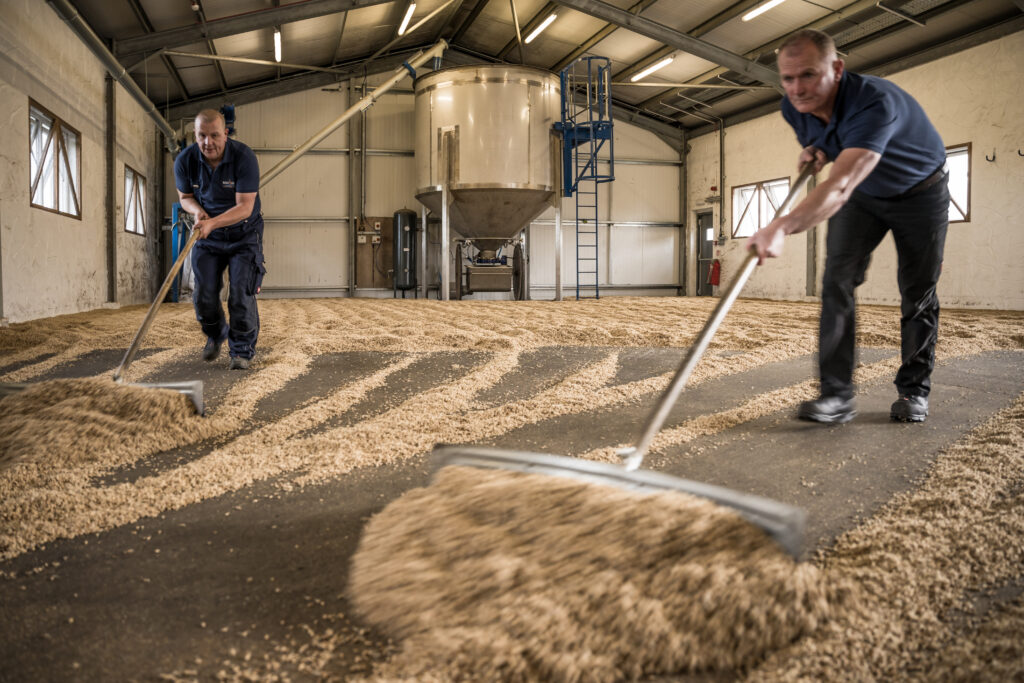 If germination continued a plant would grow and all the starches that convert to alcohol during fermentation would be used by the plant. The kilning stage terminates germination and prevents this from happening by reducing the moisture content of the green malt. 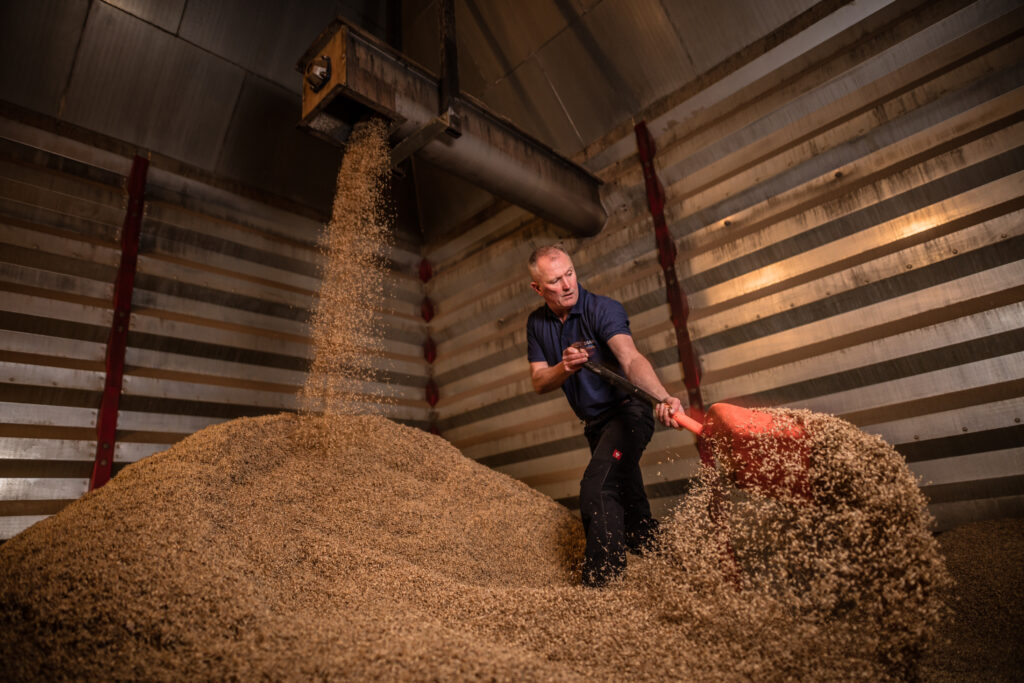 From the malt floor, the green malt is moved by hand to a conveyor which transfers it to the kiln.  To obtain that famous Islay peat smoke character in our whisky, peat is cut from a local peat bank and burns under controlled conditions for 10-15 hours approximately.  During this time the peat smoke rises up through the mesh kiln floor and penetrates the green malt.  This time of peating gives us a phenolic level of approximately 20ppm.

The three main variables that affect the kilning process include: temperature, airflow and time.

Temperature – A combination of high moisture and high temperature would destroy the enzymes developed during germination therefore we maintain a low temperature to avoid this.  Rather than a roaring kiln fire we control it so that it smoulders as we are looking to produce as much smoke from the peat as possible but keep the temperature inside the kiln from getting too hot. 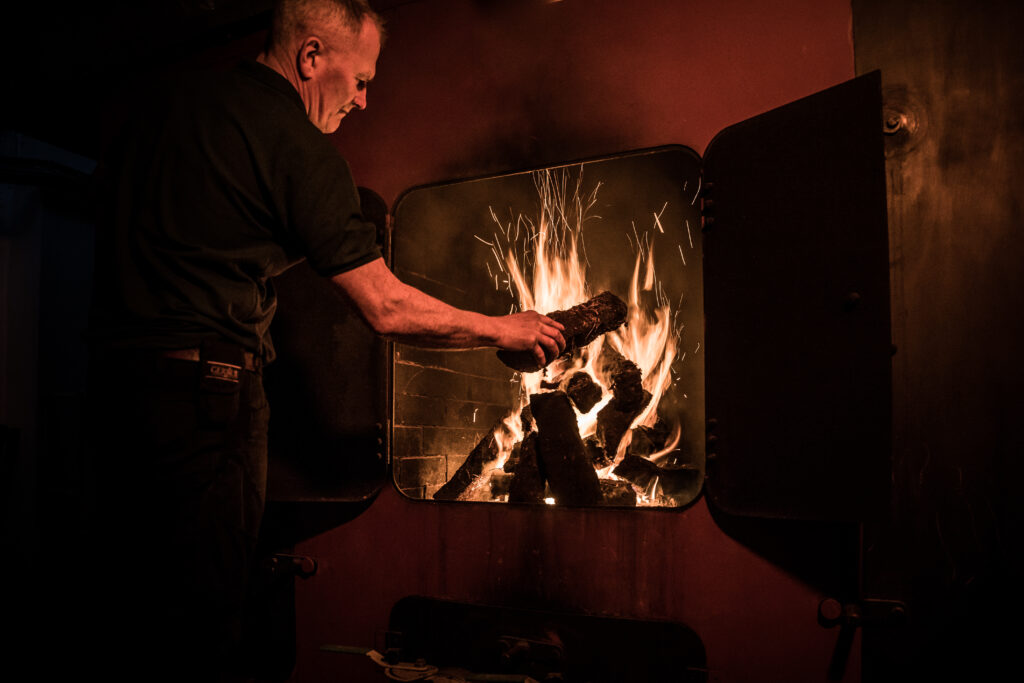 Airflow – Similarly to when the green malt is on the floor, maintaining an appropriate and even temperature as well as good aeration is vital so turning by hand will continue every few hours and the temperature inside the kiln is monitored and adapted as required. 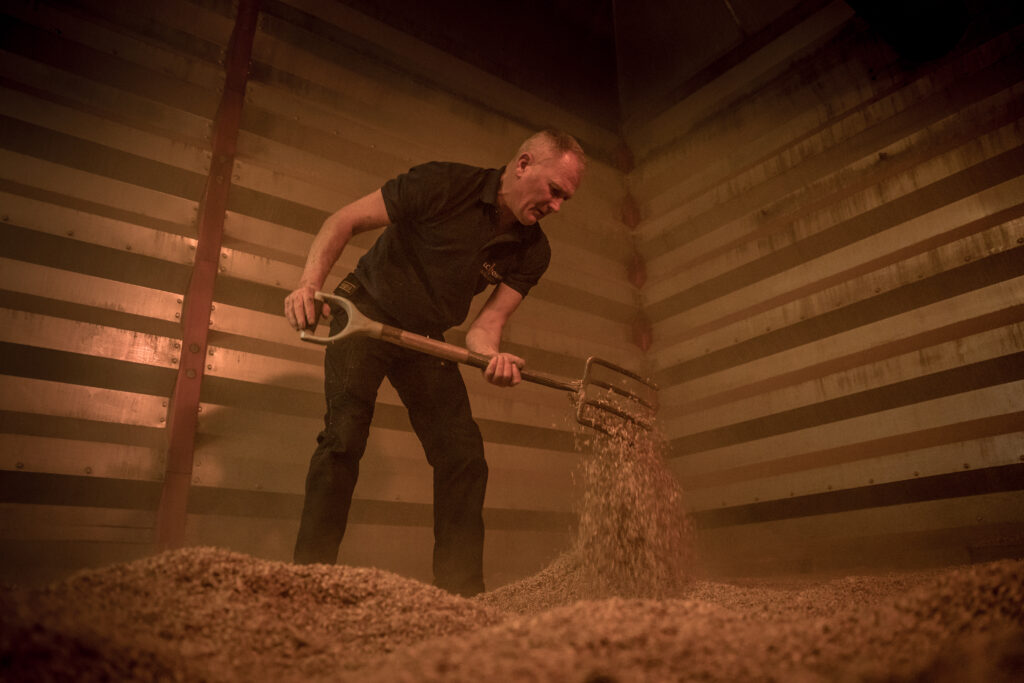 Time – Following on from the 10 -15 hours of peating we continue to reduce the moisture content for a further 20 hours approximately by forcing air through the green malt until it reaches a moisture content of between 4.7 – 5%.  The kilned product is now called malt and is in a stable form.  The grain is dormant and can now be transferred to rest in the silos for a minimum of six weeks before being milled for mashing.

Before we dive into non-age statement (NAS) single malt, let’s cover what an age-statement single malt is. Once the distilling process is complete, the new make spirit is filled into casks and set aside in warehouses for maturation. Legally, the minimum age of the spirit must reach 3 years old.…